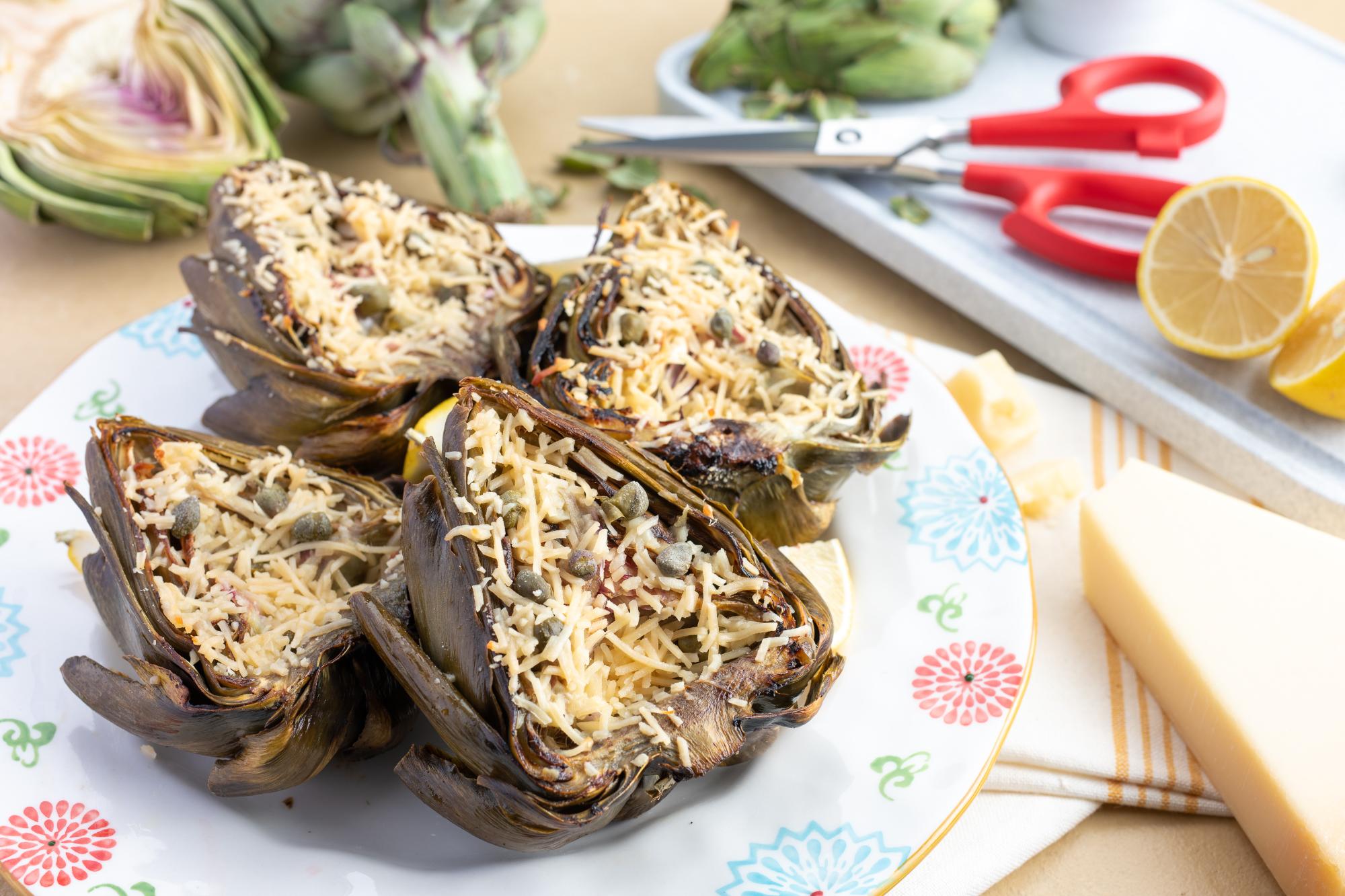 Artichokes have always fascinated me, in that I appreciate them in salads and on appetizer plates and especially when someone has taken the time to stuff and bake them. But, while I love them, I love them more when someone else prepares them for me. That said, I decided it was time to try my hand at making my own artichokes and I think this roasted version is a winner.

Roasted Artichoke with Parmesan, Garlic and Lemon is a lovely appetizer that is packed full of flavor as well as a few surprises. The most difficult thing about making any kind of artichoke recipe is the actual preparation. Using a Gourmet Prep Knife, I cut the stem off the bottom and then using the same knife, trimmed the top. Using the Super Shears, I snipped off the pointed tips of the petals. 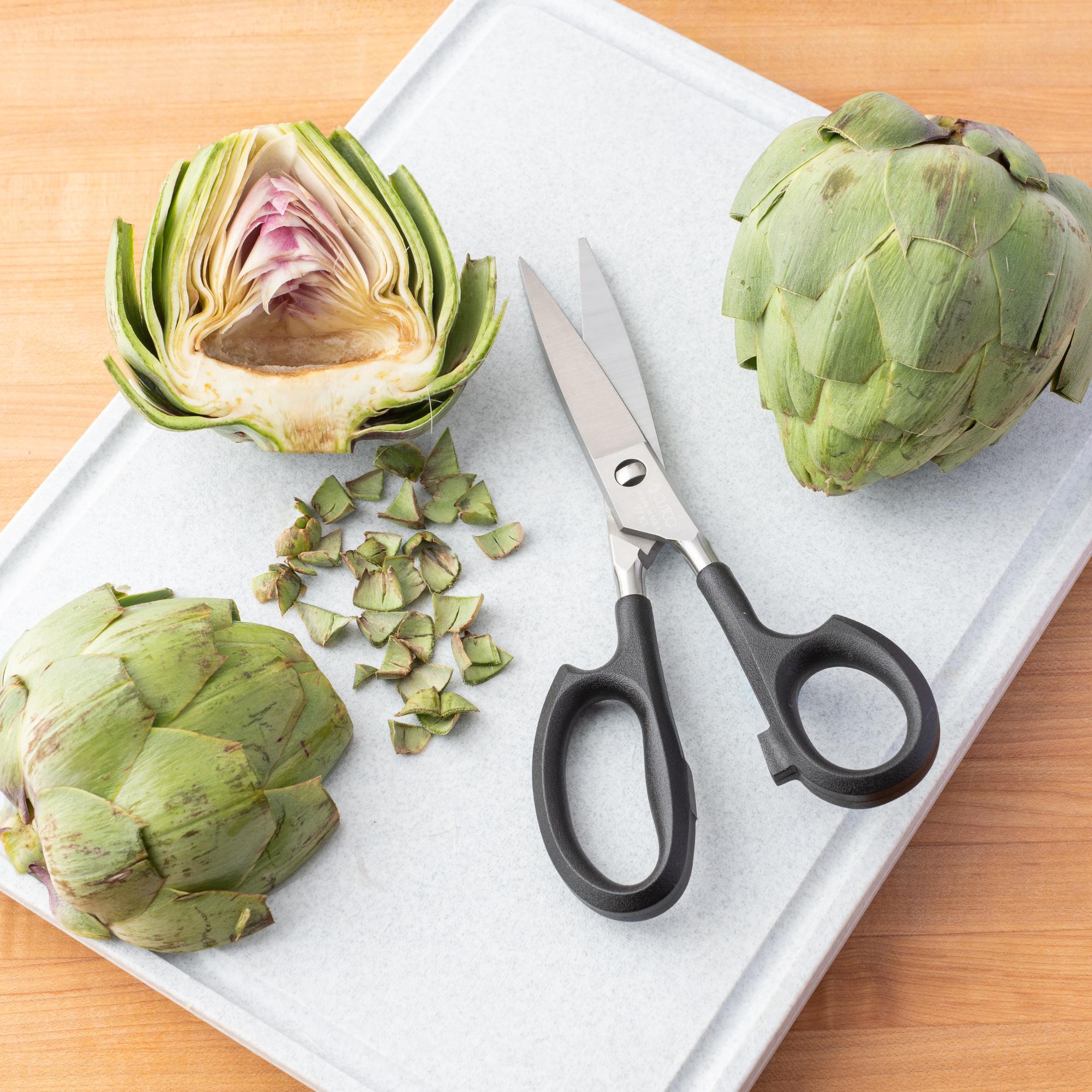 You can get step-by-step instructions on how to cut an artichoke by viewing our handy tutorial. The only additional step we added was cutting the artichoke in half for the roasting process. Quick note – you’ll want to have a lemon handy as you’ll need to rub the artichoke with a lemon or place it in lemon water so it doesn’t brown.

Once the artichoke is prepared and cut in half, I used a spoon to gently remove the furry choke. Using the tip of the spoon, I worked around the choke and it popped out easily. 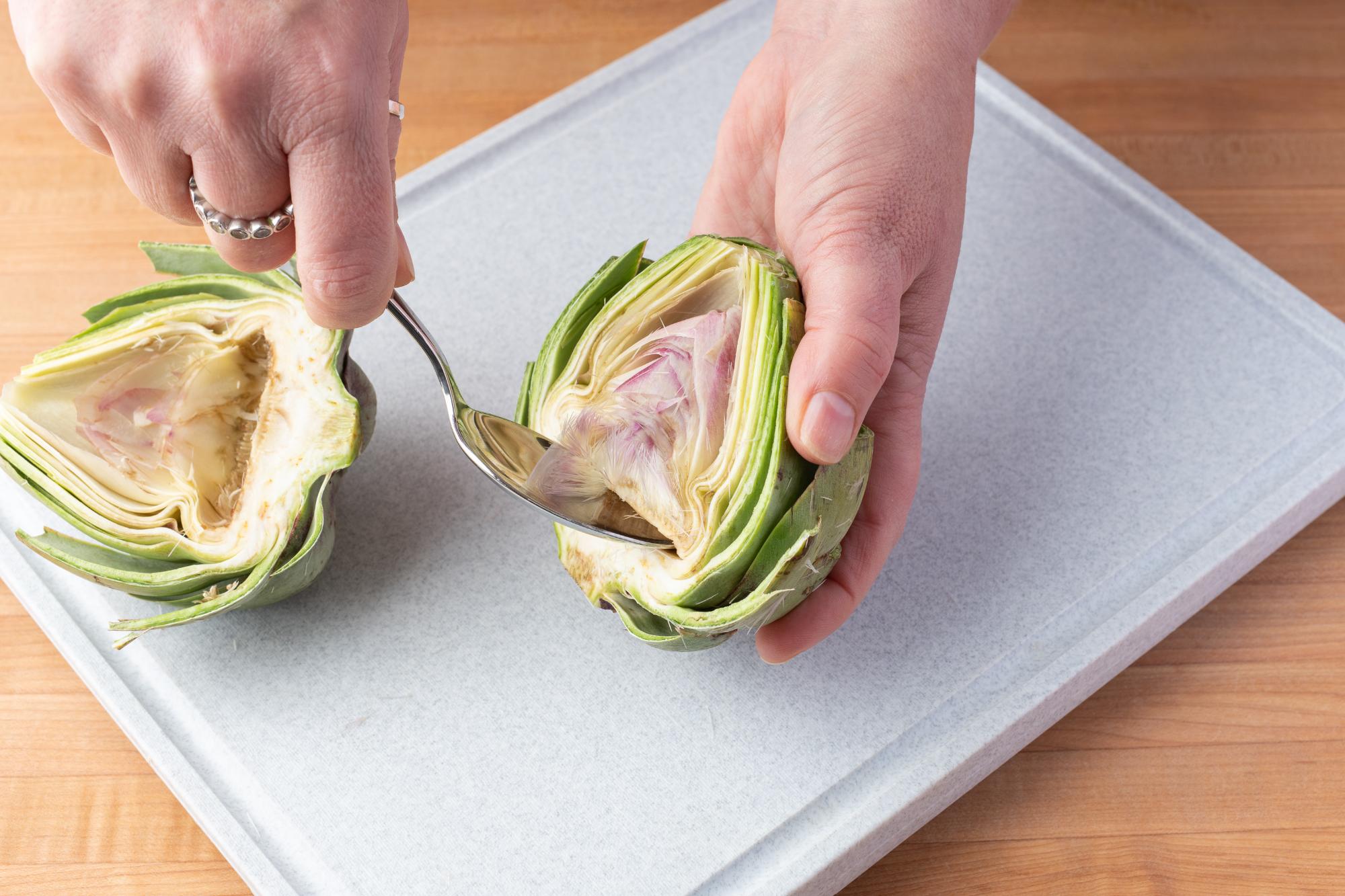 The next step is brushing the artichokes with olive oil and seasoning them with some salt and pepper. Now, here is one of the surprises I mentioned earlier. I stuffed the center of the artichoke, where the choke was, with chopped garlic and then took a slice of lemon to place over the garlic – essentially using the lemon to hold the garlic inside the artichoke since I needed to flip them over for the roasting process. 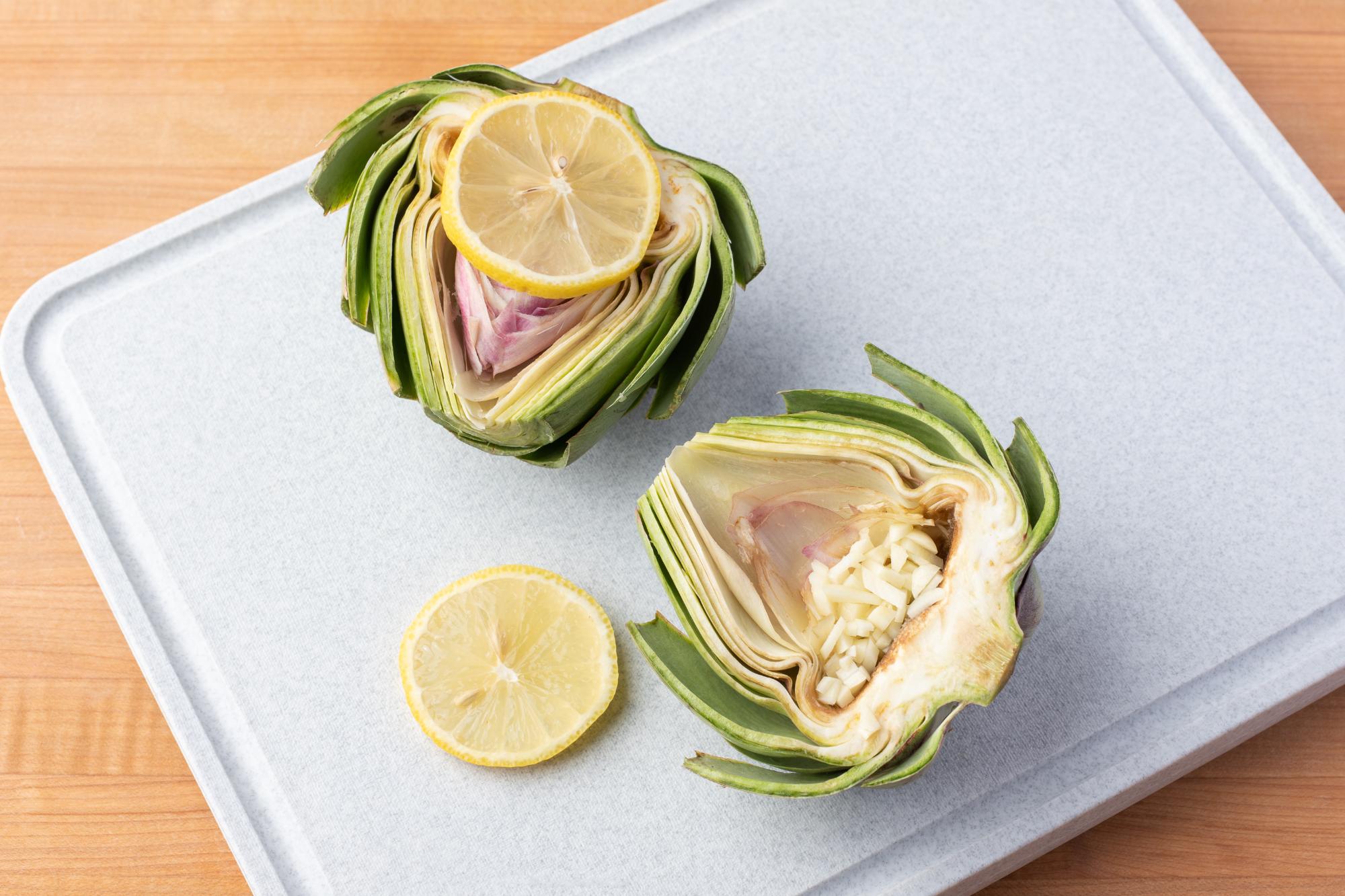 Once stuffed and flipped over, I brushed each of the artichokes with a little more olive oil and seasoning, covered them in foil and then roasted them until tender. Once they were cooked, I flipped them back over. I set aside the lemon slice and removed the chopped garlic that had been roasted in each of the artichokes. Taking a fork, I mashed the roasted garlic with some soft butter, creating a spreadable garlic butter. 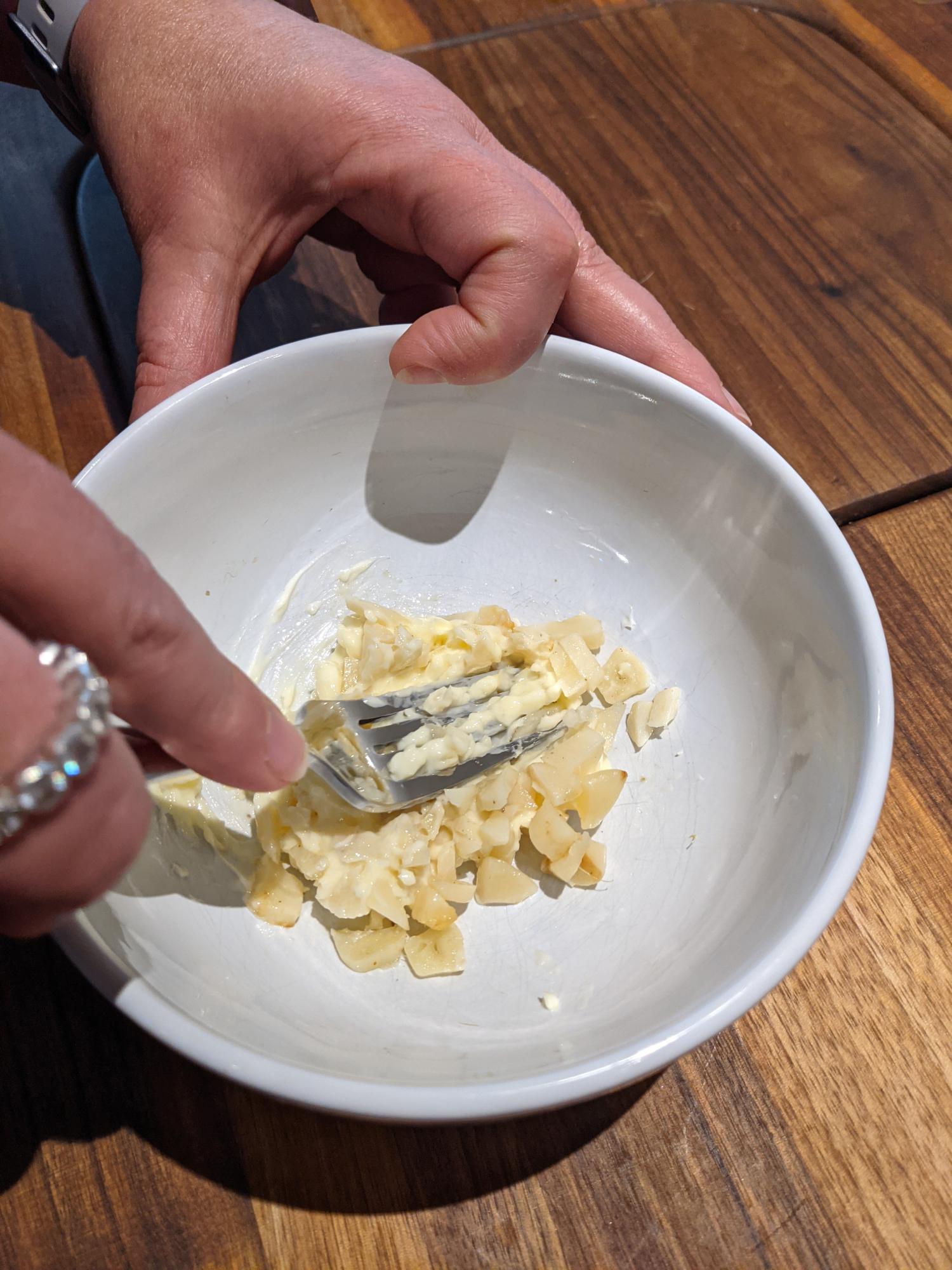 I spread the butter over the artichokes, added some capers along with some Parmesan cheese and the artichokes were put back into the oven until the cheese was melted.

The next step was the best part – eating the artichokes! This Roasted Artichoke with Parmesan, Garlic and Lemon recipe was perfection. The artichoke already had a dip (the garlic butter) so to eat it, I just pulled each petal through my teeth to remove the soft pulp. And once to the center, the delicious artichoke heart was covered in garlic butter, capers and Parmesan.

While this appetizer does have a bit of prep work, I can definitely say the finished result was worth the effort. There is something satisfying about pulling off each petal and enjoying the wonderful flavors, accented by the lemon slice that roasted with the artichokes. Give it a try and tell us what you think! 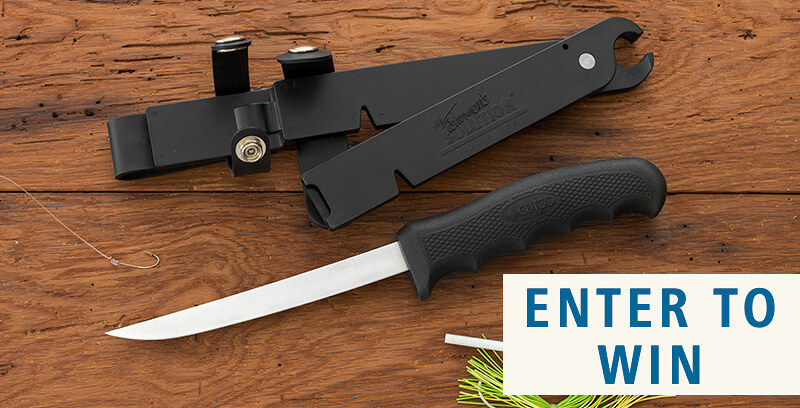 Enter to Win a Fisherman’s Solution®

Enter for a chance to win a Fisherman’s Solution. This sharp, flexible and feature-packed knife is a fisherman’s favorite.